Why Does ASEAN Matter Now?

ASEAN stands for Association of Southeast Asian Nations. It was created in 1967 by five founding countries: Indonesia, Malaysia, Philippines, Singapore, and Thailand. A few more nations signed on eventually. Brunei Darussalam joined in 1984, Vietnam joined in 1995, Lao PDR and Myanmar joined in 1997, Cambodia joined in 1999. So at the moment, there are total of 10 nations that make up ASEAN.

Essentially, there are 7 objectives of ASEAN. Namely these are:

Does ASEAN really have its own flag?

Yes, it does. The image of the flag is shown below. The circle represents unity of ASEAN. 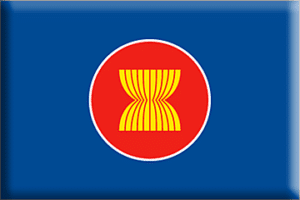 Why should my company be concerned with ASEAN?

Well, considering that just 1% of U.S. based companies currently export outside of the USA, ASEAN represents a tremendous opportunity for your business. During 2010, total trade between ASEAN countries and U.S. amounted to more than $70 billion. We would say it is a segment of the globe that should not be ignored if you’re looking for new markets for your company. Currently China, EU, and Japan trade more with ASEAN nations than the USA does. More than half of 1% who export currently export to just one country, mostly Mexico or Canada. Needless to say, there are tremendous opportunities for U.S. based companies given than 95% of world’s consumers live outside of the USA.

What can you tell me about ASEAN nations?

We’re glad you asked. Here are some rich gems for each of the ASEAN nations that can help in deciding where you want to expand. We will cover Indonesia in this part and the remaining 8 countries in Part II.